I haven’t posted in a while, but I’ve had some too-long-to-tweet thoughts knocking around my brain so I decided to put them here. A lot of this is old news but I assume you all come to this site for my sparkling commentary.

So here’s the Cliff’s Notes, in case you missed it: Mo’nique got offered $500k to do a Netflix comedy special, and Netflix also asked her to do an audition for them. She asked Black people to boycott the site, and proceeded to cut up all over everywhere. Wanda Sykes revealed that Netflix only offered her $250k, and DeRay got $5 million.

Now I believe (and the data show) that the gender pay gap is a real thing, and it’s worse when you adjust for race. But I have questions, sis. Businesses always lowball their first offer and so I wonder if she made any attempt to negotiate? Regardless of having an Oscar, Mo’Nique hasn’t had any major credits since that Christmas movie a couple years ago. In the entertainment industry you’re only as relevant as your last success. It might have been a smarter move to negotiate them up to $2 million, knock it out of the park and come back asking for more when you have the receipts.

Pulitzer prize winning journalist Robin Givhan was invited to serve on a panel at the BET Leading Women Defined conference. There was an interview with (forever First Lady in my heart) Michelle Obama, where conference attendees were asked to put their phones away as the event was a “safe space”. Well, Robin wrote this article about the interview and was kicked out of the event a few hours after the piece was published. A detailed synopsis can be found here. At any rate, I have to side with the reporter. Unless you say something is off the record, it’s on the record. And a media outlet such as BET should know the protocol for dealing with journalists. The panel was being recorded in a room full of hundreds of women, in what world was that a private or confidential affair? This was an avoidable scandal.

On Cardi B & Tiffany Haddish

People seem to be really surprised by both of these women and I’m confused. Cardi B is the living embodiment of everything rappers have been praising in their songs for years. Tiffany Haddish is funny in the same raunchy way that Tracy Morgan and Eddie Murphy are, and funny sells. But folks seem to just be sooOoOoOO aMAzEd that they became successful being “regular”.

Dave Chappelle is regular. Chris Rock is regular. Lil Wayne is regular. Drake is regular (basic, even). Are we really surprised in 2018 that women can be atypical and also successful? Are there really that many grown ass women out here who feel like they can’t bloom in the fullness of their being? How incredibly sad. And I don’t mean that in a snarky way. I was bullied as a child, but in a way it was the gift that keeps on giving. I learned early on that I had to count on myself for my esteem and sense of worth. I learned that  you can fight people or placate them, make yourself invisible or try to fit in, and they will find something wrong no matter what you do. Might as well be yourself.

Every Black woman has a salon story. Getting our hair done is a time honored pastime. While the natural movement (and broke millennials) have caused a shift away from weekly wash & set appointments, it’s still a thriving industry for weaved and braided styles and hair color services.  But these new school hairdressers are something else. They’ll still overbook you, but now if you’re not in the chair at 11:58 for a 12:00 appointment, you’re hit with a salty text message informing you that if you arrive later than 12:15 you will forfeit your appointment and also, your $50 is nonrefundable. If you want a custom hair color, you get charged extra for the dye. If you want a weave or braids, you need to arrive at the salon with your hair freshly washed, dried, moisturized and detangled. My God, do I need to put in my own cornrows too??? A friend of mine said a hairdresser once asked her to bring her own shampoo, I kid you not! A scalp massage used to be part of the shampoo, now it’s a $15 upcharge. And getting your scalp greased (hands down the BEST part of the salon experience) is completely defunct. 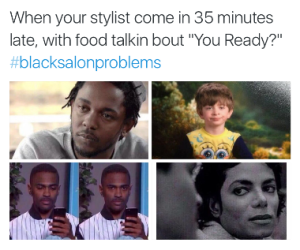 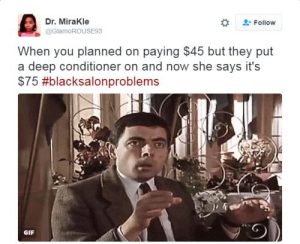 I use an app called Poshmark to resell items in my wardrobe that I’m done with, as well as final sale, nonrefundable items that just didn’t work out. I never expect to get back more than 50% of what I paid for an item. Americans generally prefer new stuff, so thrifting still has a stigma attached to it. Also, I don’t buy designer brands and they don’t make clothes like they used to. Still, I typically only sell things that look basically new. If it has stains or rips I just give it away, and I put in the effort to write detailed descriptions and take close up pictures in good lighting. And yet people still complain. I got a two-star rating this week for packaging. 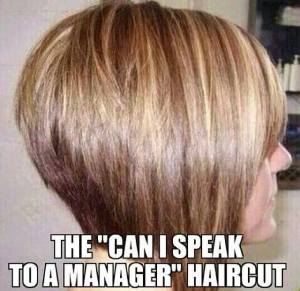 B*tch, you bought a sweater for $12 and 20% of that is going to the app fee! Your sweater is getting folded into a flat rate priority box, and you will deal. If you want tissue paper, ribbon, a thank you note, and a perfume sample go buy a new sweater at full price!

This work is licensed under a Creative Commons Attribution-NonCommercial-NoDerivs 3.0 Unported License.

Shop more of my closet on Poshmark